Some women wonder what the average breast size is.

Generally speaking, though, it's men who are more interested in this type of information. Men tend to be inveterate measurers and comparers of all kinds of things - the length and girth of various parts of the anatomy, golf scores, grade point averages and IQs, horsepower of cars, etc. 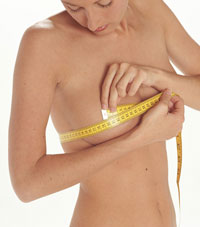 According to the information we have available, here's how average breast size in America breaks down:

So the average breast size is something of a Bell curve, with B cup right in the middle. Barely one quarter of women have the coveted C cup (considered by many to be the perfect breast size). Many men are attracted to women with D cup breasts. Rumor has it that many adult film studios refuse to even consider a potential actress unless she has a minimum of C cup breasts -- and pay more for actresses with D or larger breasts!

Average breast size according to Frederick's of Hollywood

Lingerie manufacturer Frederick's of Hollywood reports that in 1996, the average size of bras they sold was 34B. Currently, the average is a 36C. Now, granted those who purchase lingerie from Frederick's are not statistically representative sampling of American women. Nonetheless, this change is extremely interesting.

What's behind the increase in average breast size?

There's no solid answer behind the steady rise in average breast size, but there are some theories.

Some fashion designers believe that the increase in average breast size is a result of the garment industry. Many clothing manufacturers inflate or deflate sizes according to the times. As all women know, different brands of shoes and clothing fit differently. There's a big difference in a size 10 from two different companies. And as larger breasts have become more fashionable, possibly C cups have been getting smaller so more women can be proud to have a larger than average size.

Some sociologists point to the general weight gain among Americans as the cause of the increase in average breast size. Bigger people, the remind us, tend to have bigger breasts. And as obesity reaches epidemic proportions, the breasts of overweight women keep pace with the rest of them.

A final, and far more terrifying, explanation is that of excessive estrogens in the environment. Due to industrial pollution and widespread use of oral contraceptives, there are high levels of estrogens found in water in many places. In some rivers, fish are dying out because there's so much estrogen in the water that all the fish are born female. In this scenario, average breast size is growing due to this hormonal pollution.

If you don't want to settle for average breast size, you've come to the right place! We discuss different breast enhancement options available to you. We evaluate different products based on real stories from real women. You can learn more about the recommended breast enlargement method here.